If you’re anything like me, you only read Webtoons when you’re laying down on your bed, ready to take a nap or go to sleep at night. Though it may be a horrible choice if you’re trying to sleep at night, you choose to read horror and thriller Webtoons. The thriller Webtoon that I read recently was Hell is Other People by Yong-Ki Kim, so I couldn’t dare sleep facing the wall without looking over my shoulders every second for five whole nights.

Alright, that was an exaggeration. The Webtoon didn’t have me jumping out of my seat- or out of my bed. It has a very creepy and unsettling storyline that has you begging for more. What got my thumb to tap on the Webtoon rather than hover over it was the unique art style and color palette that I personally have never seen before.

The Webtoon is about Jongu Yun, a young man in his 20s who moves out to Seoul, South Korea for work. Low on money, he rents a cheap room in a run-down building with creepy residents, but is that all they are? Just creepy? You might be reading this blog post because you’ve already read the Webtoon yourself and are trying to read more about it. You might also be like me. When you finish watching a movie, finish playing a video game, or finish reading a Webtoon, you feel empty. You wish you could erase your memory so you can witness the artwork for the first time again.

Although I don’t know how you can erase your memory to witness this Webtoon again, I do have the perfect recommendation- or at least it’s perfect in my eyes. Another thriller Webtoon that I read is PIGPEN, written by Carnby Kim and illustrated by Beom Sick Cheon. I read this webtoon before Hell is Other People and I can’t get over how similar the two Webtoons are.

PIGPEN is about a young man who wakes up on a beautiful beach. He has no memory of who he is or how he ended up there. A creepy family find him and takes him in, but is that all they are? Just creepy? 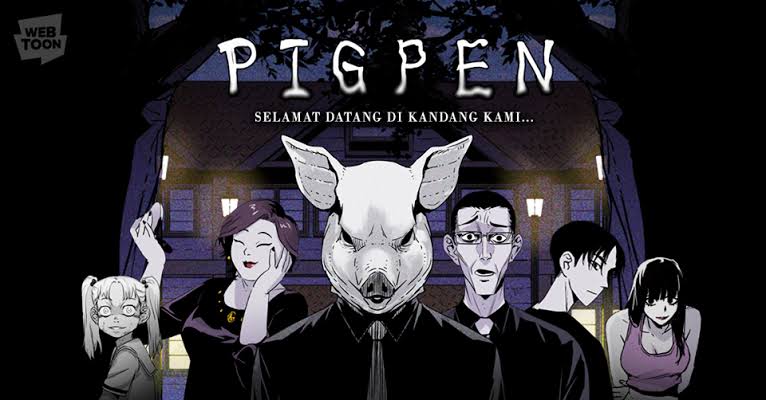 That last part sounded familiar, huh? “Is that all they are? Just creepy?” Both Webtoons revolve around the idea of a young man living among creepy residents who seem to be up to no good- and harboring something dark and sinister. As you read these Webtoons, you’ll find yourself guessing what could potentially be going on. It’s unsettling and it’s a thrill.

If you read one of these Webtoons, liked it, and haven’t read the other, there’s no reason for you to not fix it right now.

Enjoy and hold on to your seats- or beds!

Hi, my name is Mazin Zien. I'm an English and ESL teacher who is also an actor and writer for animation, video games, on-camera, and graphic novels. I love k-drama, anime, webtoons, manga, and video games. I do my best to live my life around my interests and enjoy every second of it. View all posts by Mazin Zien

My blog is 100% free because I rely on ads and your optional donations. It'd be a big help, but I appreciate you just being here. Thank you so much for all your support!